Quick sort is one of the most widely used and efficient sorting algorithms. It is a divide and conquer technique, that means, we divide a problem into sub-problems and then solve them accordingly.

This sorting algorithm includes selecting a pivot point and finding its appropriate place in the array by putting elements smaller to it on its left side, and the elements greater than it to its right side. We then create a partition around this correct position of pivot.

This process of creating a partition is the backbone of the Quick Sort algorithm.

It is to be noted that any element can be selected as the pivot, but we have to proceed accordingly. In our case we will use the first element of Array as pivot element.

Firstly we can select the pivot point in the following ways:-

Then we find the index where this pivot should be present in the sorted array.

The array is then partitioned around this pivot, and recursive calls are made to the left and right sub-arrays following the same procedure, that is, selecting the pivot point and finding its correct place in the sorted array.

We can divide the algorithm into two parts, one will be the responsible for partitioning the array and finding the correct position of the pivot, while the other part will be responsible for placing recursive calls to the left and right sub-arrays accordingly.

Now, this pivot is the correct place for this element in the array.

Again we will follow tha same procedure until value of i is less than j. 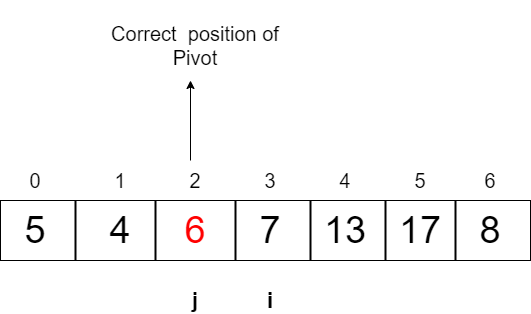 Now the array is partitioned around the pivot.

Once we get the partitioning done, same process is followed recursively on the left and right sub-arrays, which makes every element placed in their correct positions.

The tree will look as follows:- 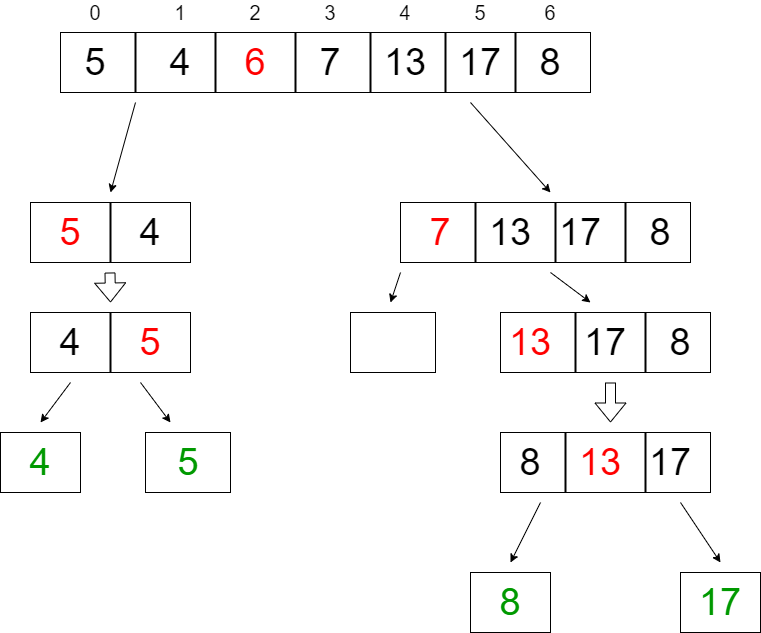 Now let’s have a look at the code for Quick Sort.

Since quick sort is a recursive algorithm, therefore it requires a stack for computation and hence the space complexity O(n).